An approach to Gonzalo Plata

At Driblab we are always interested in emerging talents. Young players who, in a suitable context, can develop and shine in the long term. This is the case of Ecuadorian Gonzalo Plata (Guayaquil, 2000), whose name has been linked to some Premier League clubs in recent months. Plata is a left-footed winger who Sporting CP […]

At Driblab we are always interested in emerging talents. Young players who, in a suitable context, can develop and shine in the long term. This is the case of Ecuadorian Gonzalo Plata (Guayaquil, 2000), whose name has been linked to some Premier League clubs in recent months. Plata is a left-footed winger who Sporting CP signed at the beginning of 2019, captivated by his great performance in the South American U-20 tournament played in Chile.

The first thing that stands out about Plata on video is his athleticism. He is very fast, flexible and resists well the struggles with rivals. But if we take a look at his data we will see that he is an attacker capable of doing many things. He has only played 626 minutes with Sporting’s first squad, but he has shown his capacity to create imbalances. Although he has not been as effective in these sets as he was in his own country, when he played for Independiente del Valle, Plata has already shown his one-on-one ability in Portugal. He averages 2.01 succesful dribbles per 90 minutes. 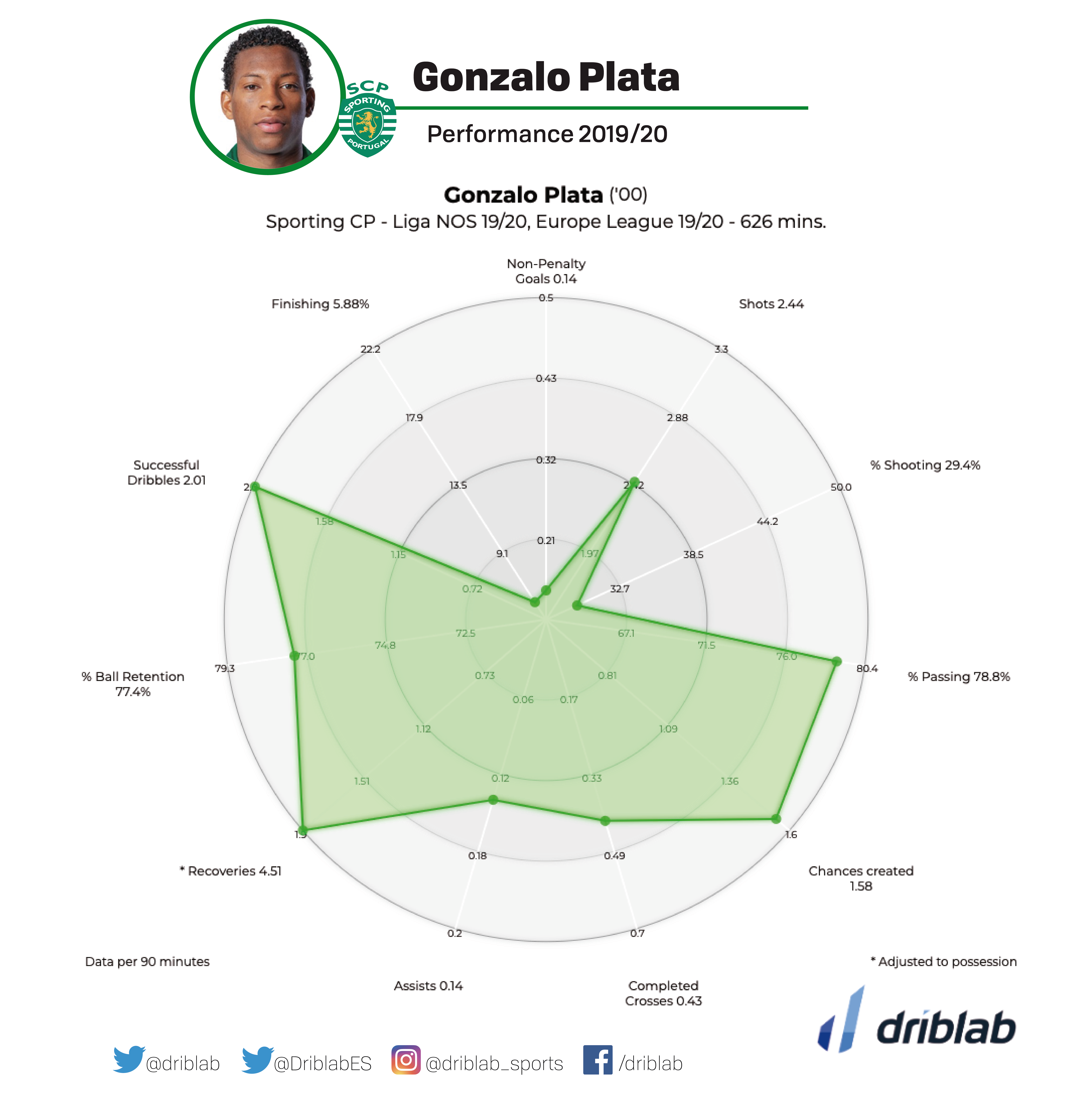 Furthermore, he registers 4.46 touches in the opponent box, which is a very high figure for an attacker who starts almost all his plays from the sideline. This means an improvement on the one he signed in Ecuador in 2018 (3.39). He frequently was the player who shot there; and now he is reaching those final metres to make the last pass. This is reflected in his chances created (1.58) or expected assists (0.28) averages.

On the other hand, Plata has room for improvement in the finishing. Although he’s still quite young, his goals number is usually under the xG sum accumulated by his attempts.

The sample of minutes that we have from his stage in Lisbon is still very limited, but after checking our database, we can say that Plata has excelled in every competition in which he participated. Here we can see some of his metrics in the last edition of the U-20 World Cup, which was played in Poland about a year ago. Ecuador got a meritorious third place and Plata was one of its leaders. He performed at a great level, being among the most productive players in the competition in dribbling and showing a lot of incidence in the creation and the finishing of his national team. He also stood out in passes into the final third (23.17). At Sporting he is registering some less, but he persists in a high figure (17.68).

We are Driblab, a consultancy specialized in the statistical analysis of players and teams; our work is focused on advising and minimizing risk in professional football decision-making in areas related to talent detection and footballer evaluations. Our database has more than 150,000 players from more than 120 competitions, covering information from all over the world. Here you can learn more about how we work and what we offer.