As an example of the potential that Driblab has in detecting young talent, we wanted to highlight five U23 players who have surprised in the Brazilian state tournaments and who have not yet made the move to Brasileirao. In these weeks of pause in professional football we believe that our services can be more critical […]

As an example of the potential that Driblab has in detecting young talent, we wanted to highlight five U23 players who have surprised in the Brazilian state tournaments and who have not yet made the move to Brasileirao. In these weeks of pause in professional football we believe that our services can be more critical than ever to identify interesting profiles in leagues and expand scouting options. Furthermore, at Driblab we have decided to adapt by offering trial periods so that clubs can use our services at a fraction of their usual cost and be able to discover talent in the more than 120 competitions we cover worldwide, including these ‘estaduales’ in Brazil.

The 22-year-old goalkeeper managed to maintain a very high standard at the Pernambucano tournament. It is surprising that he was able to save 77% of the shots that came from inside the box, and he also had a good volume of xG saved per shot. In this comparison we see his performance and that of the rest of the goalkeepers under 25 years of age in all these state tournaments. A quite positive performance not only in percentages but also in efficiency regarding xG faced and goals conceded.

On the defensive line we were surprised by Paulo Henrique. A very complete player with a great number of recoveries per game, very confident in the one on one winning 87% of their actions and also with good metrics in aerial duels. The surprising thing about this profile is that his great defensive success comes with great skill with dribbling and a great offensive influence with crossing. A right full-back with a great performance and balance between defense and attack. 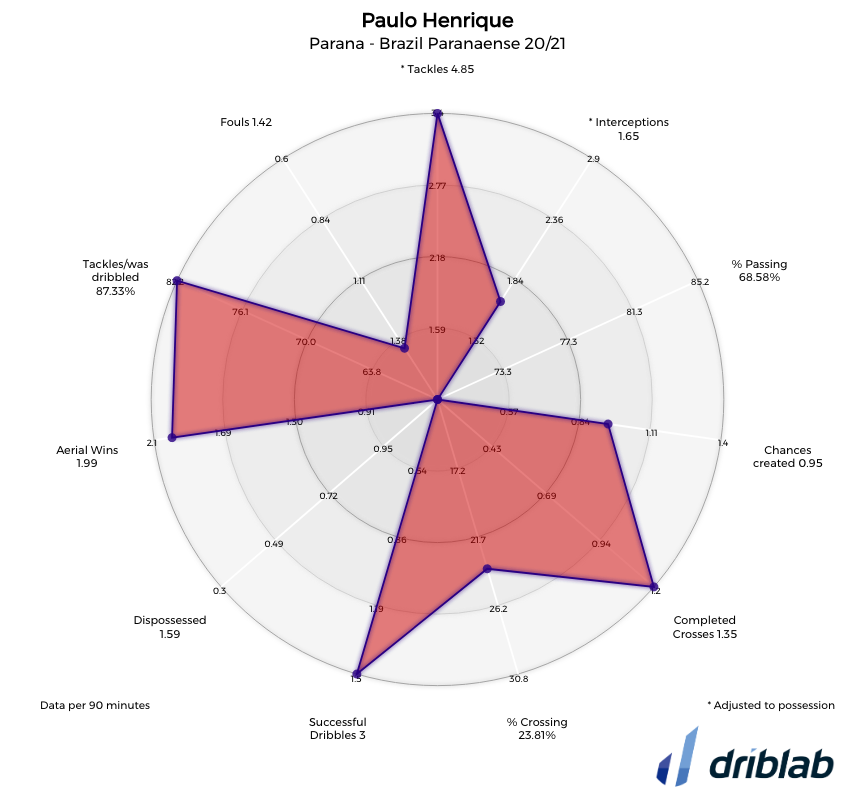 In midfield Ronald was undoubtedly the most difficult player to beat. This 22 years old player has averaged 3.5 successful tackles per 90 minutes with a success rate of over 60% as well as a great read for interception. Add to that his ability to pressure rivals and good dribbling skills, even with work ahead to make a greater impact with possession, but a very complete profile of a holding midfielder who has yet to make his move to Brasileirao.

The 18-year-old playmaker is one of the most exciting names of these tournaments. He is an influential player with possession and great agility between lines. A footballer who, with his age and out of the top tier, achieves a great number of dribbles in inner zones and with a fantastic percentage in these duels. A different talent to what is usually seen behind the strikers and that is a great option.

Leading the attack we wanted to highlight a player who has influenced more with his passing than with his finishing (he scored twice with 1.3 xG but was not his best output). Ze Vitor is a striker with great numbers in passing and has generated many chances with a remarkable value of expected assists. In addition to great work off the ball. A different profile that after not working in Sweden has shown a great level in his return to Brazilian football.