In these weeks without football we have decided to review the best of the season and pick out the names that have surprised us most in our series of articles on new talents: defenders, midfielders, wingers and, in today’s edition, forwards. The 2019/20 season has seen the undeniable rise of Erling Haaland, Timo Werner stablished […]

In these weeks without football we have decided to review the best of the season and pick out the names that have surprised us most in our series of articles on new talents: defenders, midfielders, wingers and, in today’s edition, forwards. The 2019/20 season has seen the undeniable rise of Erling Haaland, Timo Werner stablished as a star and another year of Kylian Mbappé improving his figures. To get out of the ordinary, we went beyond these stars to look for the new young talents in attack:

The flow of goal scorers in Dortmund does not stop. If this year is Haaland who is setting the pace, last year it was Paco Alcácer who closed the door on Alexander Isak. In fact, the Swede had to leave in January to Willem II where in 16 games he scored 13 goals and 6 assists. After those promising months, Real Sociedad made a strong commitment to him and in his first year he has already produced results. His performance in Spain has not decreased in terms of the number of shots, goals per 90 minutes, passing percentage and even improved in finishing. At only 20 years old, he is already showing signs of scoring regularity and a complete profile also outside the box. 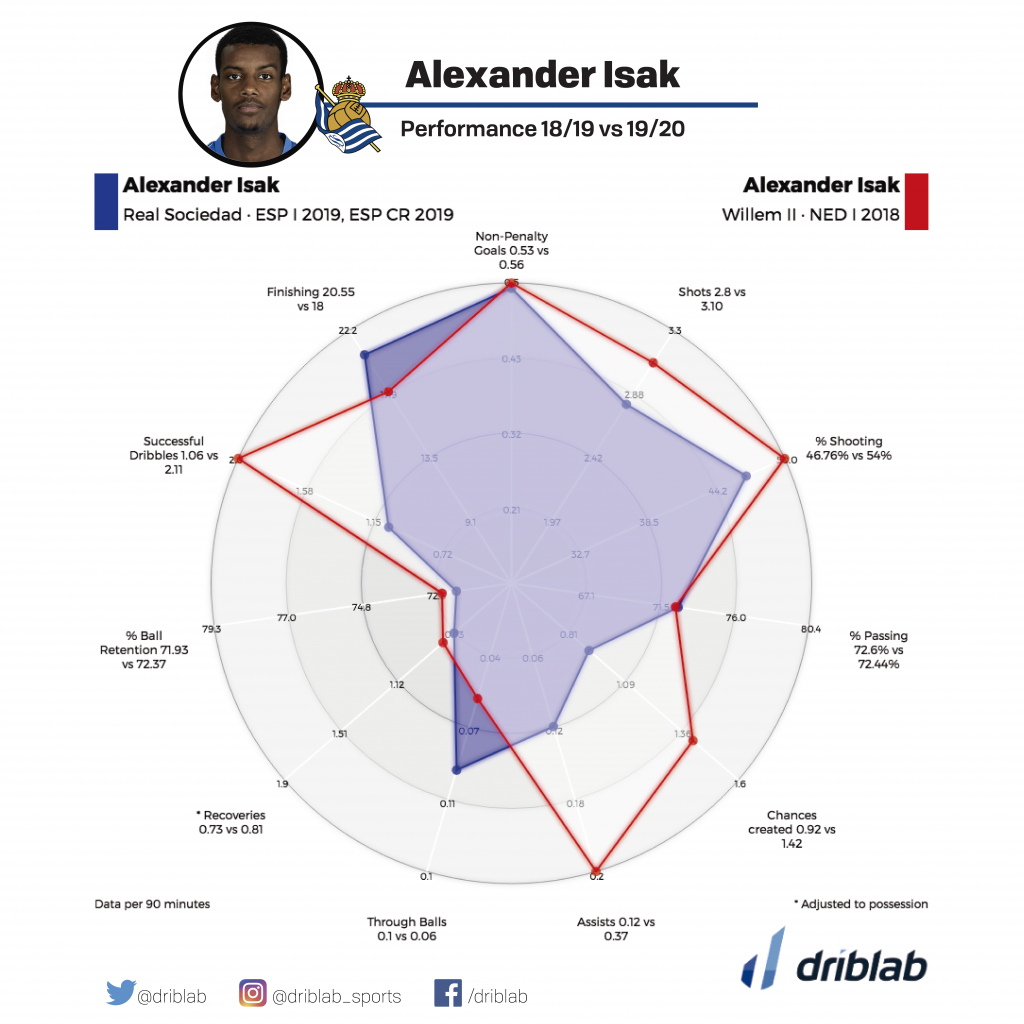 A finisher from the bench

Although his highlights in 2020 have been on Netflix, Josh Maja has been steadily improving since his debut with Sunderland first team. The 21-year-old striker has not found the expected consistency in the number of minutes but has always taken his chances: in 2017/18 his finishing was 11% with 0.15 goals per 90 minutes (without penalties); in 2018/19 that figure rose to 22% with 0.53 goals per 90 minutes; and this year that success has reached 36% with 0.64 goals per 90 minutes. Although he has played just over 800 minutes, Josh Maja’s performance continues to grow and his reliability on goal makes him one of the best new talents on target. 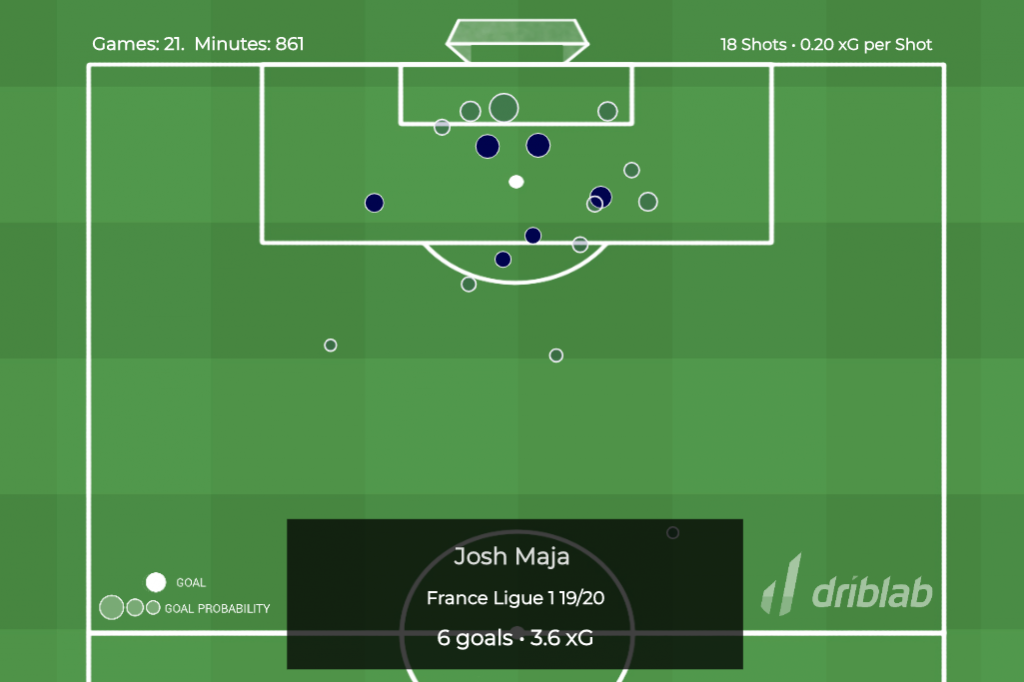 From Belgium to Champions League. And ready for a title contender?

The growth of teams like Lille will depend on their success not only in terms of who to buy from but also when to sell. Last summer Victor Osimhen was signed after a great year at Charleroi, is it time to say goodbye? The young Nigerian’s performance has not been affected by the change of league: if we compare his figures with the rest of the U-23 strikers in the big leagues, we see that he stands out as a player who generates expected goals but also assists and who has improved in aspects such as keeping possession or selecting his shots compared to last season. Osimhen is already being linked with big clubs and for Lille it could be a successful operation after signing him for 12 million. Time to go? 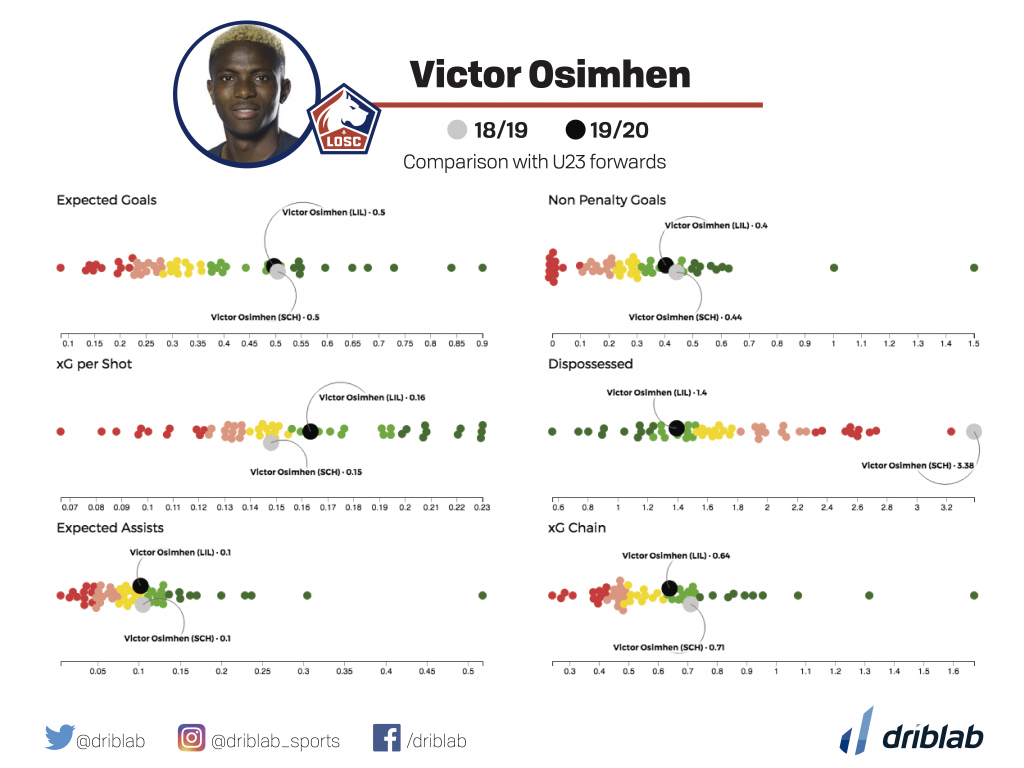