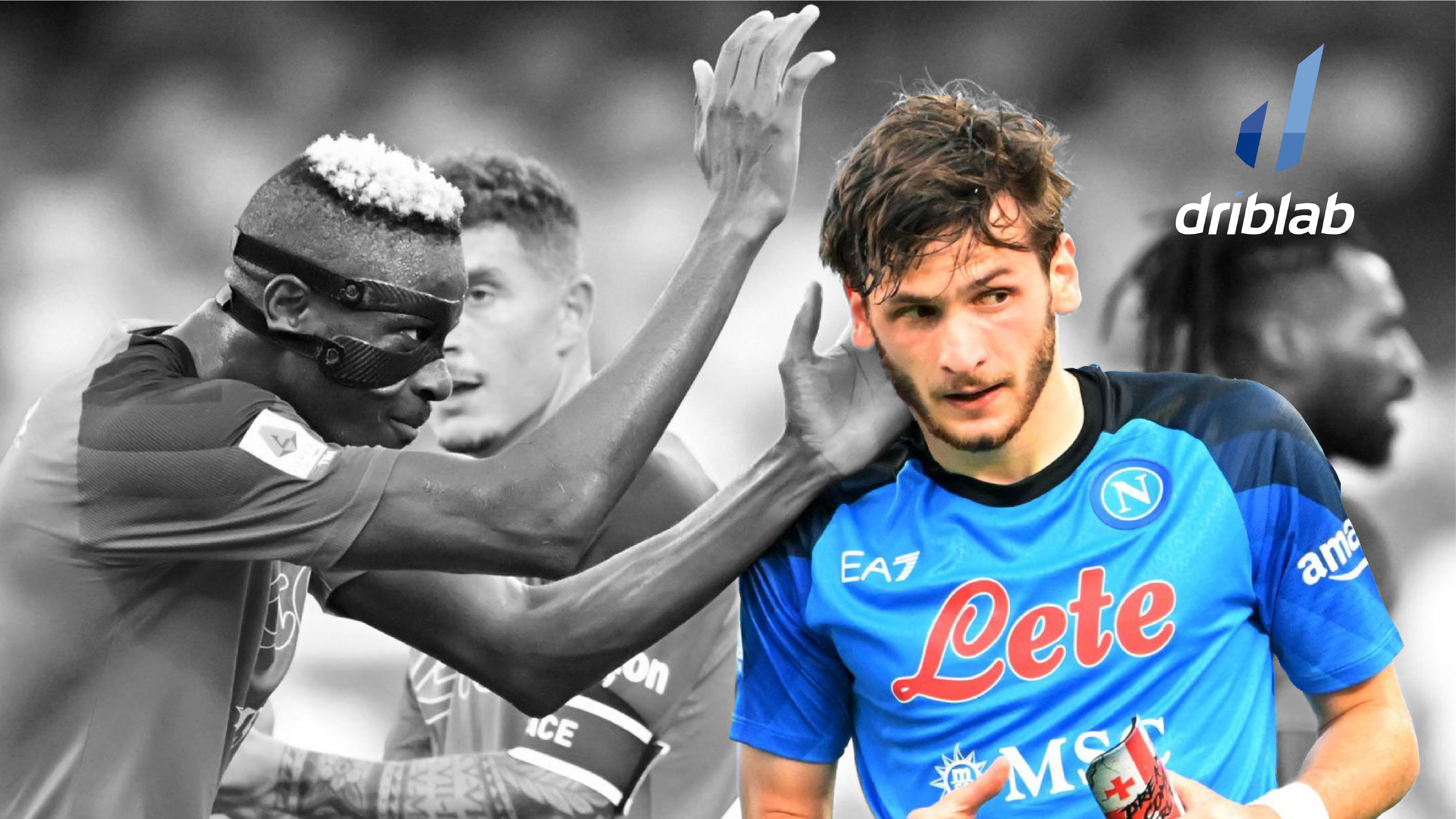 More than a month has passed since the start of the season in Europe’s top five leagues and there are already individual breakthroughs that can be talked about in detail. Some examples are Alexis Mac Allister‘s start at Brighton or the consolidation of Oihan Sancet as one of the most influential players in Ernesto Valverde’s new Athletic Club. Turning our eyes to Italy, it is difficult to overlook the name Khvicha Kvaratskhelia. The Georgian player has been the most impactful signing in these first weeks of the competition. He has needed no adaptation to the Napoli model and his performances in August and September have put him well above average for his position in Serie A within a wide range of metrics.

Thanks to the depth of our coverage, at Driblab we was able to track data from the daring winger since his early professional stage at Rustavi. Kvaratskhelia made his debut in the club’s senior team at the age of 17. That year Khvicha’s minute statistics were already raising alerts. The table below shows the profiles of the 2001 or 2002 generation who played the longest in the top divisions of UEFA leagues. He was in the top 10 of that ranking, just behind his compatriot Zuriko Davitashvili, recently signed by Girondins Bordeaux.

Naturally, not all the players on this list have made the leap to higher level tournaments. But we do find cases like Ivan Ilić, Adam Hložek or Strahinja Pavlović. And others like Saliba or Badiashile were already able to accumulate many games competing in the Ligue 1. In any case, Kvaratskhelia’s climb is one of the most striking, coming from a much more peripheral and unknown league.

The reality is that at the time he performed was well above the standard league values despite the handicap of not playing for one of the strongest teams in the country: Rustavi finished that year’s competition as seventh out of ten clubs. On the radar below we see that Kvaratskhelia had outstanding averages of Expected Goals, touches in the opponent box or successful dribbles per 90 minutes.

It may seem that Khvicha started his career as a player more likely to finish the play himself than to generate for others. But the reality is that his ability to dribble and do damage by carrying was already providing many collective advantages at the time. And that is reflected in advanced metrics such as Expected Threat in open play, which gives value to actions in which a player moves possession into areas of greater threat to the rival team.

After an unsuccessful four-month loan spell at Lokomotiv Moscow, Khvicha was transferred to Rubin Kazan in July 2019. This club became his launch pad. Even during his first campaign there the winger showed a fairly high performance in those parameters in which he had already excelled in his homeland. Although it is not an advanced metric, the average number of shots per 90 minutes is quite representative in Kvaratskhelia’s case.

In this table we see that he has always been a really aggressive player who looks to take the ball to the target on a frequent basis. His historical data shows that at Rustavi, Rubin, Dinamo Batumi and even Napoli he has been clearly above average in terms of shot volume. In his last season in Russia (2021/22), his team’s low production of offensive actions affects his performance, which decreases in this respect. However, the player remains above average for wingers in the local league.

If we analyze the figures of his three years at Rubin Kazan we detect that the player was clearly ready to compete in a stronger league. In the Russian Premier League he averaged 2.55 shots, 3.66 successful dribbles and 1.11 key passes in regular play per 90 minutes. He also got around 27% of the touches in the opponent’s box generated by Rubin in the minutes he was on the pitch. While progressing at club level, Khvicha began to make a name for himself at the Georgian national team, for which he has accumulated 9 goals in 16 official games.

With those credentials mentioned above and after a brief spell with Dinamo Batumi, the player landed in Naples on July 1st with the expectation of adapting to a top league. And the reality is that we cannot refer to words like adaption or transition, because in these first few games Kvaratskhelia has performed as one of the most productive wingers in European football. In the map above we see how he is damaging opponents with carries, with many of these progressions ending in a shot (green lines) or a key pass (blue lines).

Although we have to wait and see how the player’s metrics evolve, it seems to have been a great move by Napoli. The club’s sporting director, Cristiano Giuntoli, recently mentioned that in order to sign the winger they had to get ahead of clubs like Real Sociedad, Roma and Juventus.

As of today, among players with at least 200 minutes played this season, Kvaratskhelia leads Serie A in the parameters of open play key passes (2.80) and Expected Threat in open play (0.55), ahead of Charles De Ketelaere and Gerard Deulofeu respectively.

How much is it worth to make an assist?

Is an actual assist more valuable in measuring the talent of a passer or the model that gives value to the quality of the pass regardless of the outcome?