The maturity of Rafinha Alcántara

The ball is sounding again in La Liga. It was more than three months off, but that doesn’t seem to have affected some players. A good example is Rafinha Alcántara, who was already performing at a high level in the early months of 2020. The player on loan at Celta Vigo is showing a regularity […] 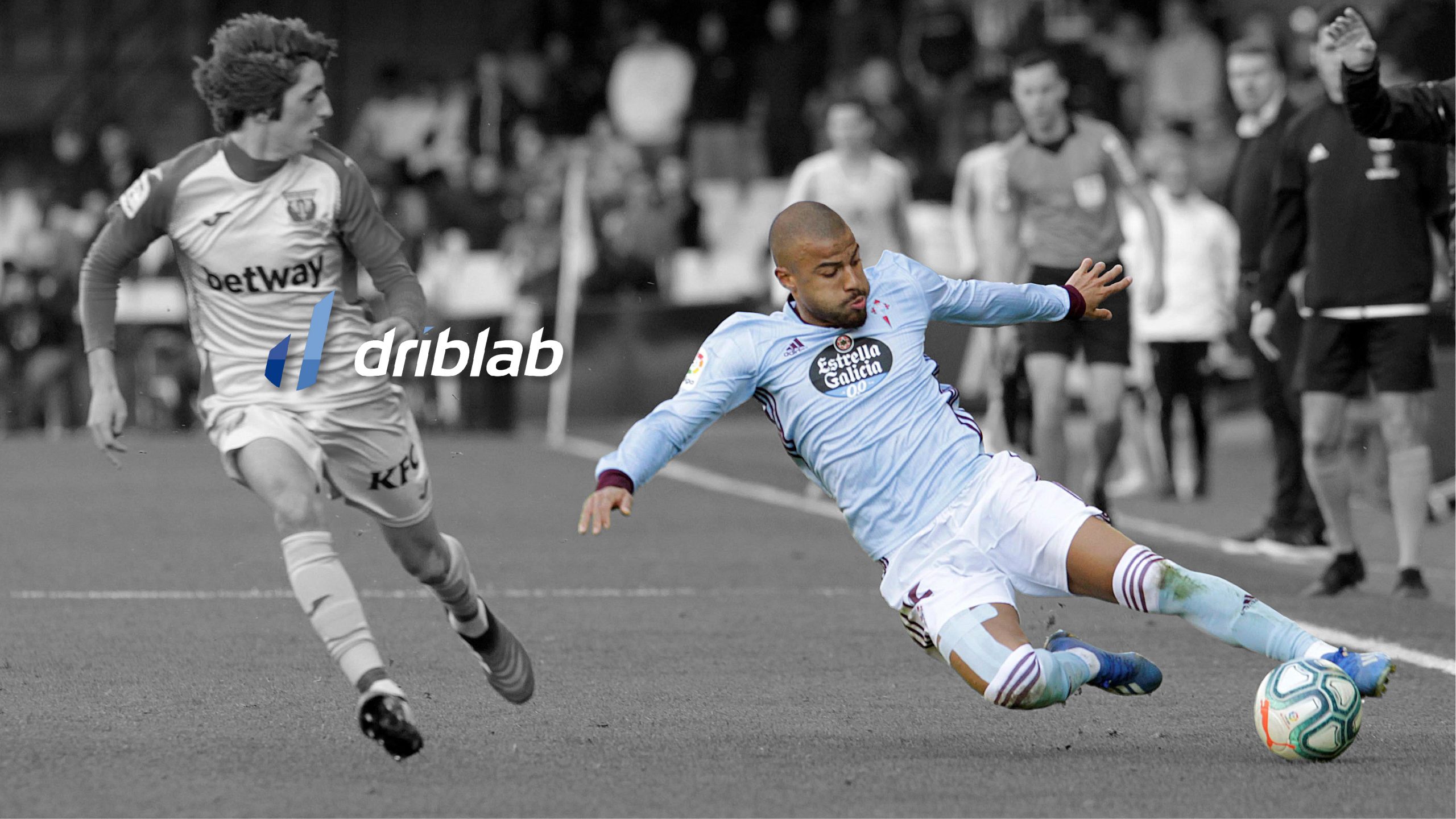 The ball is sounding again in La Liga. It was more than three months off, but that doesn’t seem to have affected some players. A good example is Rafinha Alcántara, who was already performing at a high level in the early months of 2020. The player on loan at Celta Vigo is showing a regularity that has not been seen for a long time. It is possible to think that the main reason of it was the lack of minutes that has suffered in other stages, but we should not ignore that their averages are being more complete.

Although his figures of created chances or expected assists have decreased, if we take a look at the three seasons prior to this one, we can see that the player has grown a lot in different aspects, having a bigger influence on the collective. He is dribbling more often (and with an awesome effectiveness: 68%), pressing more, recovering more and even has improved his numbers in the aerial disputes. In this graph we can see some of his averages compared to all the players of La Liga who have played at least 800 minutes this season. Rafinha is among the best in terms of xG build up, participating in the 0.48 per 90 minutes construction. Partly because of the frequency with which he serves passes that end up in the last third of the field. 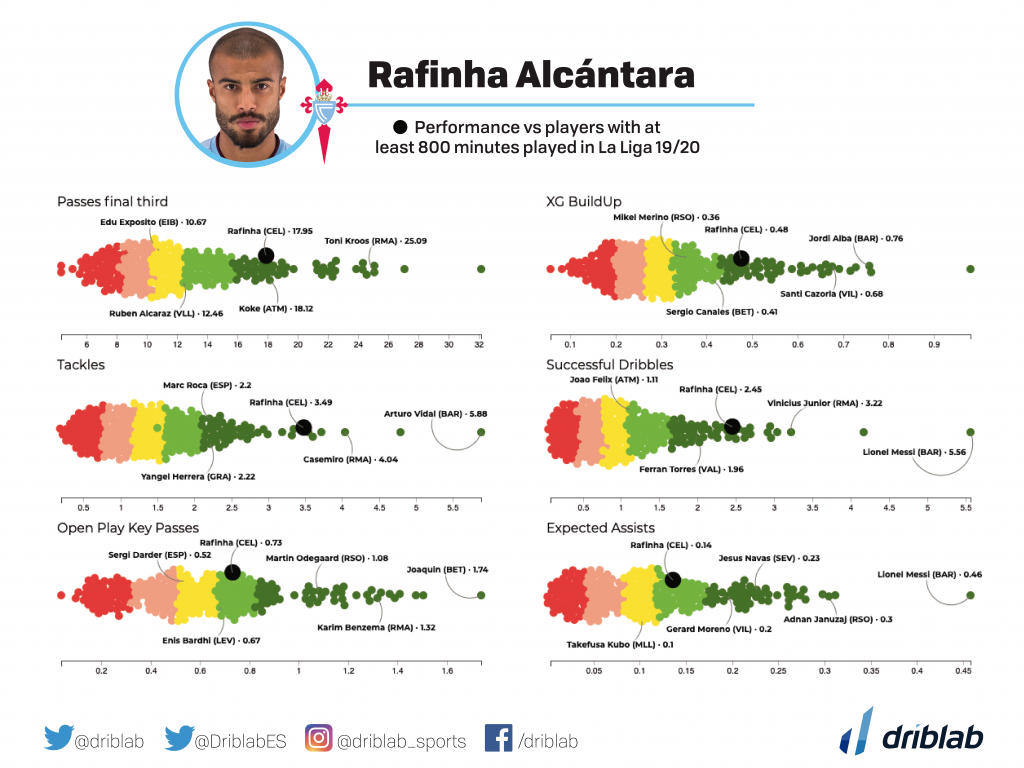 One of his essential improvements is in the defensive tasks. Rafinha is maintaining a top average of tackles per 90 minutes (3.48) and is also intercepting above average, something he had not done in the previous three campaigns. That’s why he is among the best of the competition in terms of ball recoveries.

Another aspect he has evolved in has been in ball progression. He’s usually helping the team to move forward by filtering passes to teammates in more advanced positions, but also by carrying the ball toward the last third. In this map we can see the 162 carries he has made this season, losing the ball only in 15% of those occasions. 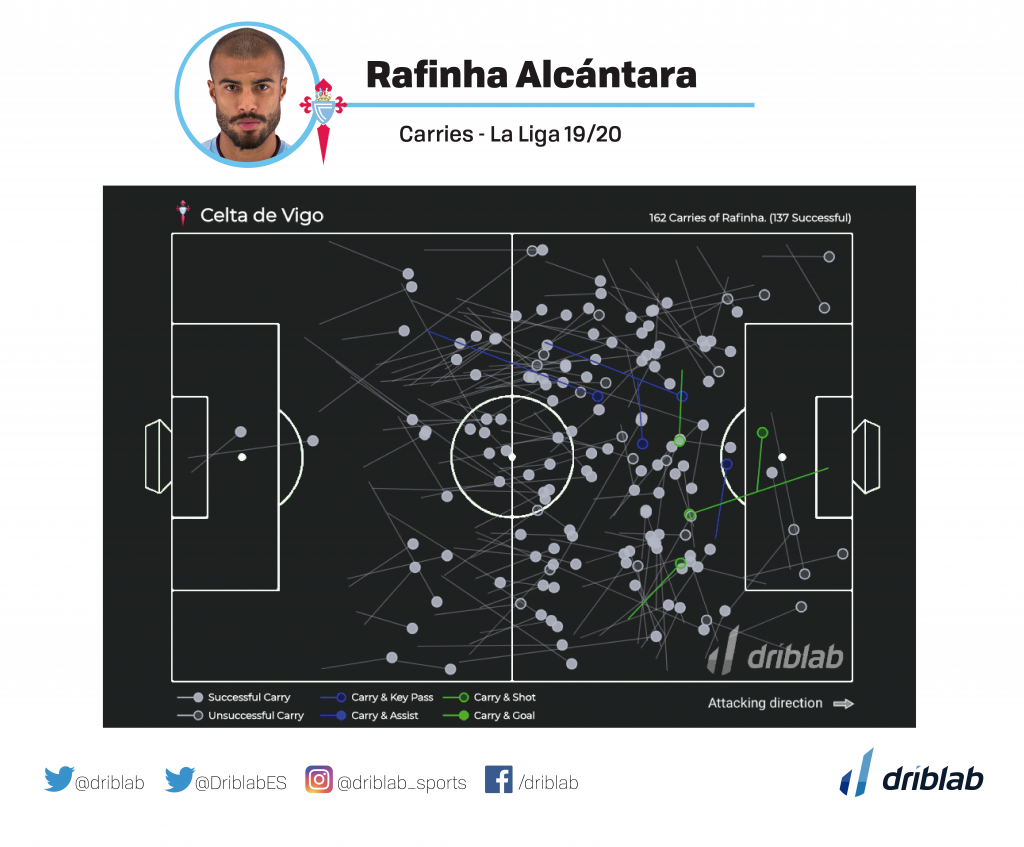