In sports there are always guys who don’t get the credit they really deserve for their numbers. Just as we have done before with other European leagues such as the Premier League or the Liga NOS, at Driblab we’re taking a look at the Austrian Bundesliga today with the aim of finding players whose performance […] 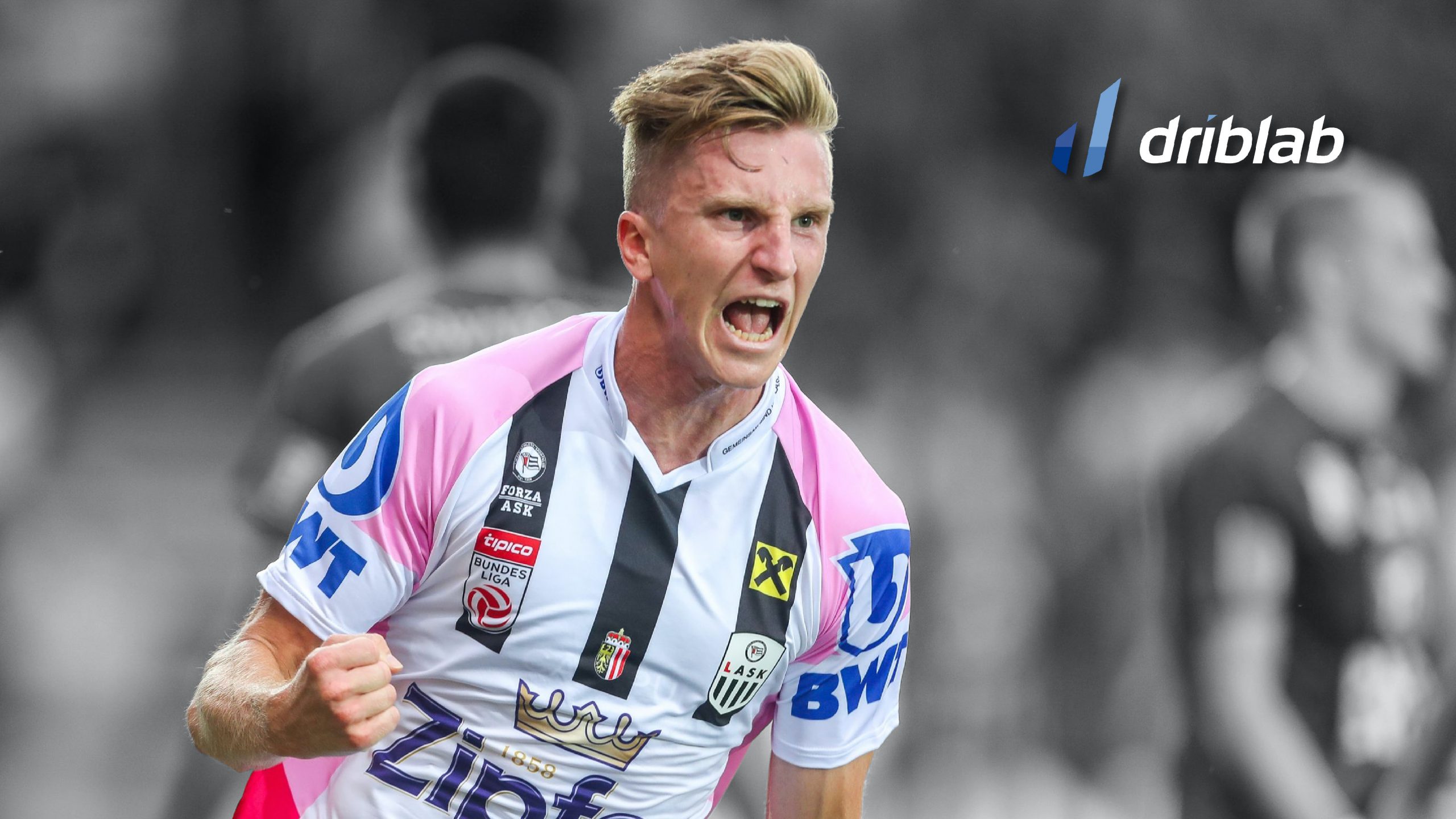 In sports there are always guys who don’t get the credit they really deserve for their numbers. Just as we have done before with other European leagues such as the Premier League or the Liga NOS, at Driblab we’re taking a look at the Austrian Bundesliga today with the aim of finding players whose performance is underrated. Beyond RB Salzburg or Rapid Vienna there are names who could perform in other contexts.

There the big surprise of the campaign is LASK Linz. The team led by Valérien Ismaël was the most productive in the regular season with 54 points, and also topped their Europa League group with 13. One of the reasons for their success was their defensive reliability. Thanks to players like Philipp Wiesinger the team conceded very few goals in the first half of the season. The 26-year-old centre-back has performed above average in most of the parameters we consider in this position. 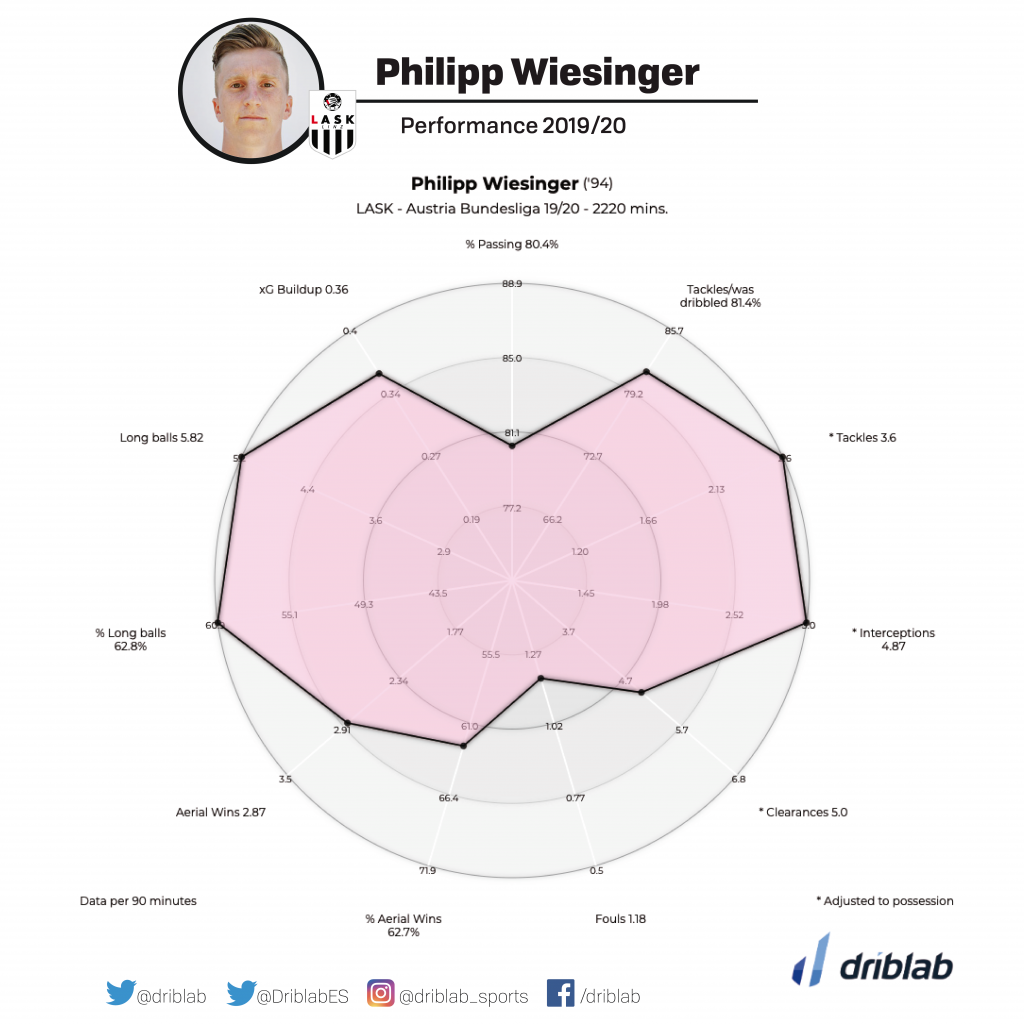 Wiesinger has proven to be very effective in individual disputes, both in the aerials and in tackling actions, with a very high percentage (81%) considering the volume of tackles he do. He also has an average of 4.87 intercepted balls, which speaks well of his reading and anticipation skills. But he doesn’t just stand out without the ball. In terms of pins he has been really good, giving the Linz many solutions with the long shift and contributing to the build up of 0.36 xG per 90 minutes.

Another player to follow is Otar Kiteishvili, the midfielder of SK Sturm Graz, who in his second season in Austria is showing the talent that had already been seen in Georgia. Kiteishvili left his country in July 2018 after having accumulated good figures at Dinamo Tbilisi. Already fully adapted to the Bundesliga, he has proven a great ease in generating chances for his team-mates this year. He has an average of 0.19 expected assists per 90 minutes -0.15 in open play-. But above all, he’s been outstanding in one-on-one situations. 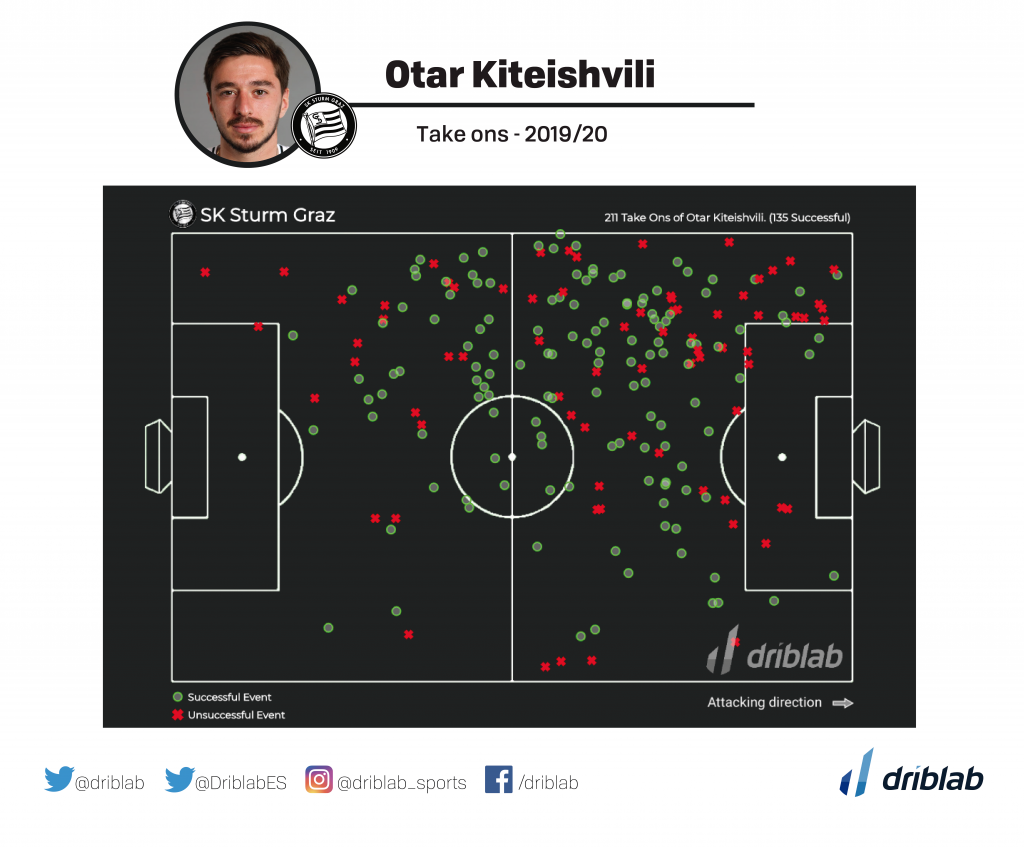 We are talking about a player who must improve his passing decisions, participate in the creation of more xG and achieve more ball progressions. However, he has qualities that are difficult to find and one of them is surpass rivals. He’s among the five Bundesliga players who complete more dribbles per 90 minutes (3.07), with almost 64% success ratio in this type of action. It should be noted that, despite his size, Kiteishvili’s a player who is capable of adding in the defensive aspect. His figures in tackles are striking, both in terms of volume and effectiveness (83%).

Our third name is Lukas Schmitz, who will play for Dutch VVV-Venlo in the upcoming season. The veteran German full-back has performed at a high level in his two years at Wolfsberger, and is very dangerous when he reaches the final third of the field. He has achieved very high numbers of expected assists, accumulating 6.4 this season. In addition, he is a player who achieves quite a lot of ball progressions and who participates in the build up of 0.6 xG per 90 minutes. That is to say, he is a lateral with a lot of influence in the rival field. 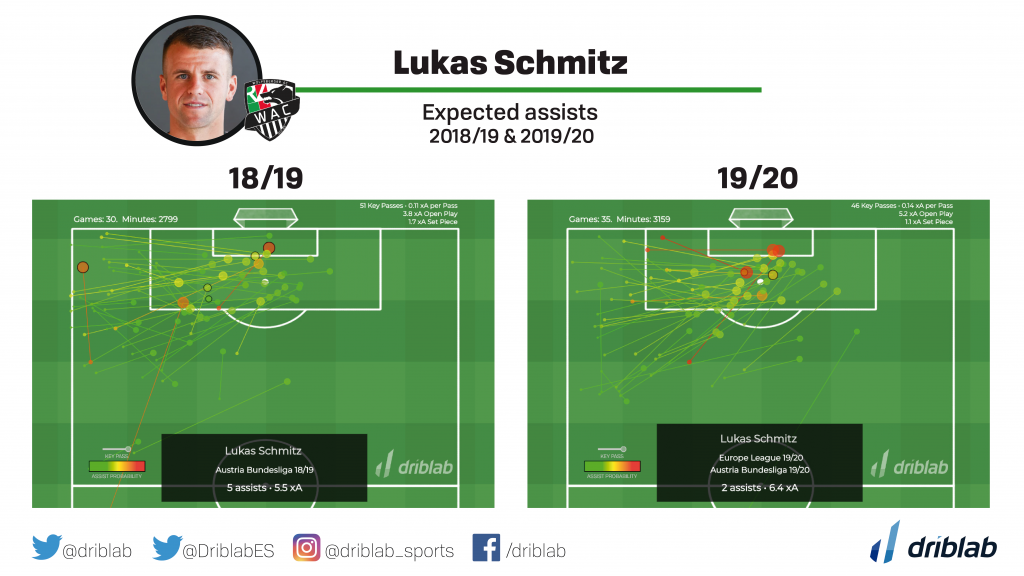