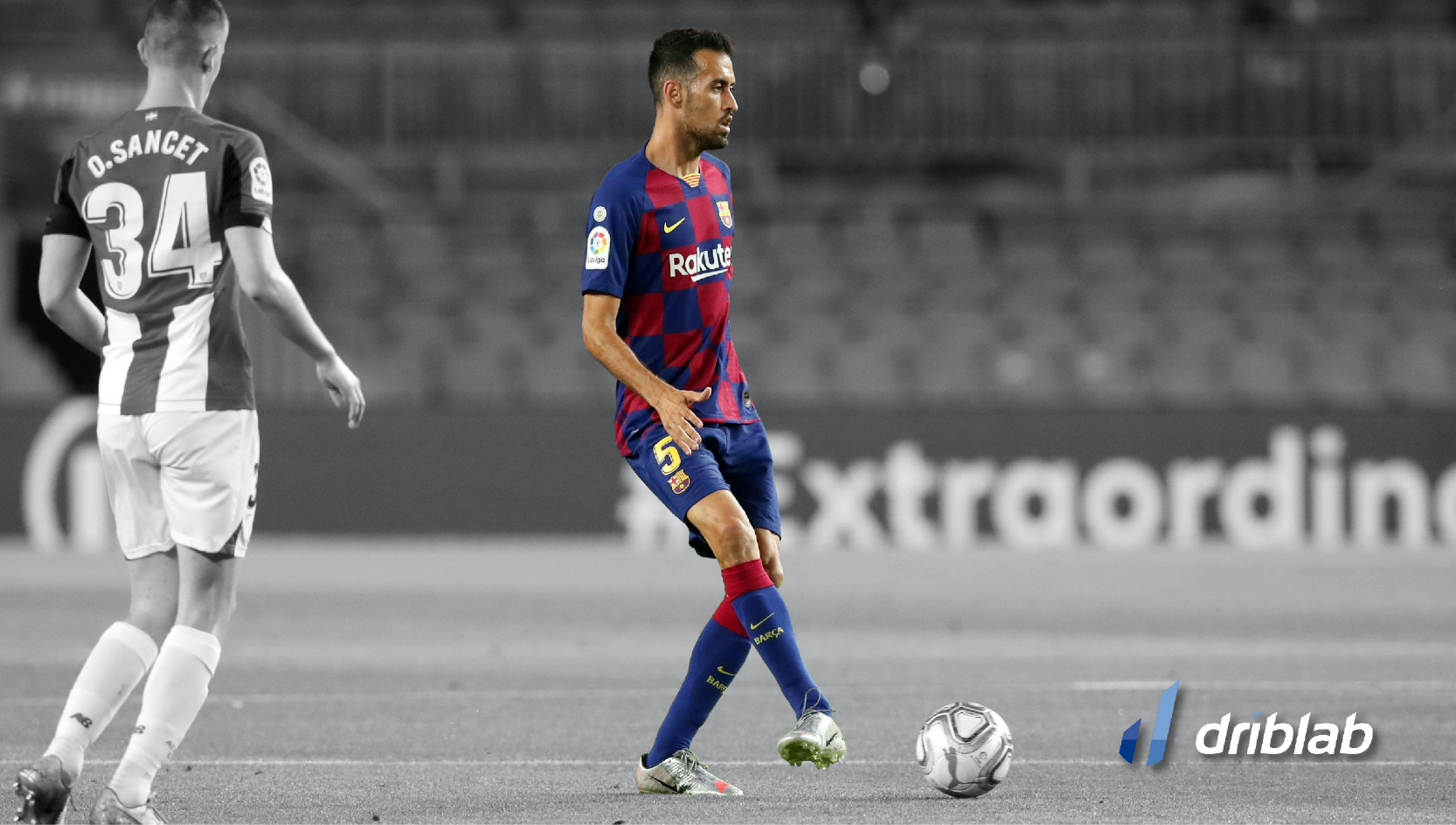 Barcelona is one of the most unique clubs in European football in terms of the way they play and the way they plan their matches, with a great deal of patience in the build up of each play. The impressions that people have from the outside are reinforced by the statistics: in the last ten campaigns they have averaged 65.7% possession, attempting an average between 620 and 751 passes per game. Despite the fact that essential players such as Xavi, Iniesta and Alves left a while ago, the Catalonians are still on the same road map. One of the masts of this ship is Sergio Busquets, a fixture in the central-midfielder position for more than a decade. The player from Sabadell has a proven track record, with a top response in many big games and more than 120 matches with the Spanish national team. But the continuing catastrophes in the Champions League have opened up a period of change at Barça and Busquets may need a younger replacement in the near future. At Driblab we have used the data to try to find an under 25 player who can cover his usual tasks.

Firstly, we will analyze the Busquets metrics in recent years. Despite the feeling that his physique is not as good as it used to be, his averages still leave him in a very good position among the midfielders of the big leagues. His extraordinary passing success (90%), which is hardly affected when the passes end in the final third, is accompanied by very good records in ball progression or xG build up -which takes into account plays that end in a shot-. He is also a player who adds in the defensive phase, with very high recovery averages. However, it is understood that in a team like Barcelona certain metrics are multiplied by the style, being a particularly aggressive team when they lose the ball. It is here that a small “downhill” in the Busquets’ performance can be glimpsed. While in 2015/16 it had a sum of 8.12 between successful interceptions and tackles, in 2020/21 that sum is 4.63. Regardless of whether the club is looking for a replacement in the short term or not, in this post we will evaluate some alternatives.

In order to find a younger player who can be assimilated into the Busquets profile, we have used the parameterised search. It is a tool that we often use with our clients and that allows us to screen by establishing a series of filters. In this case we have looked for players under 25 years old, with a minimum height of 180 cm, who make more than 2.5 tackles and more than 1.5 interceptions per 90 minutes, who contribute to the build up of at least 0.35 xG and who have an average of dispossessions (steals suffered) of less than 1.4.

At first sight, among those who meet the requirements, the most appropriate profiles seem to be those of Cheick Doucouré (Lens, 2000), Rodrigo Bentancur (Juventus, 1997), Ibrahim Sangaré (PSV, 1997), Manuel Locatelli (Sassuolo, 1998) and Aurélien Tchouaméni (Monaco, 2000). It is true that some of them lack sufficient experience at the first level, but almost all of them have maintained a significant growth line in the last two years. Doucouré, for example, is proving to be one of the most efficient central midfielder in Ligue 1 in its first year in the category. However, if we stop at its volume of passes attempted per 90 minutes (46.7) it is a far cry from that of a player like Busquets. Something similar occurs with Tchouaméni (49), who does not yet seem to be sufficiently exposed to ball intervention to evaluate him. A footballer who does not fulfill the last of our filters, having participated in the build up of less xG than the rest, but who fits in for his work in many other tasks, is Mikel Merino (Real Sociedad, 1996). The Spanish player has been standing out a lot in the recovery, the aerial game or the pressing since last season, but his figures in the distribution are far from those of the rest of the players in the list.

Sangaré is indeed a player who is having to make quite a few on-ball decisions this year at PSV Eindhoven, with about 62 passes attempted per 90 minutes. He also has a high volume of successful defensive actions, with good numbers of tackles and interceptions far above the average for the position. But in his case the jump seems more pronounced, since he is playing in a non-top league and last year at Toulouse did not show such solid numbers. In short, in this search, the best placed candidates seem to be Locatelli and Bentancur. Although they are two different players, both are used to finding teammates regularly in the final third. In the graphs below we see all the deliveries they have made this season from midfield positions to the final 35 metres.

Both are players who participate in a very regular way and who are used to overcoming rival lines with passes. Although Locatelli makes more use of long-range movement from his own field. If we look at the Sassuolo player’s metrics, we find a player with more offensive initiative than Bentancur, but his talent for offensive play and distribution from midfield makes him suitable for a role like Busquets. This season (1514 min.) he is generating 20.2 ball progressions (advances of at least 10 metres through the pass or drive) per 90 minutes of play. Bentancur also averages quite a few such advances (16.8) and is also very effective as a passer. What sets them apart is that Locatelli, who is more exposed because of the role he plays within his team, suffers more steals than the Uruguayan. But both could be the player to replace Busquets. In the accumulative of successful tackles plus interceptions both already have similar averages (4,99 the Italian; 5,06 the Uruguayan) to the one of the azulgrana player, in teams less prepared to press after they lose the possession of the ball.