In light of the possible exit of River Plate's full-back, we use our models to search for and analyze players who could replace him. 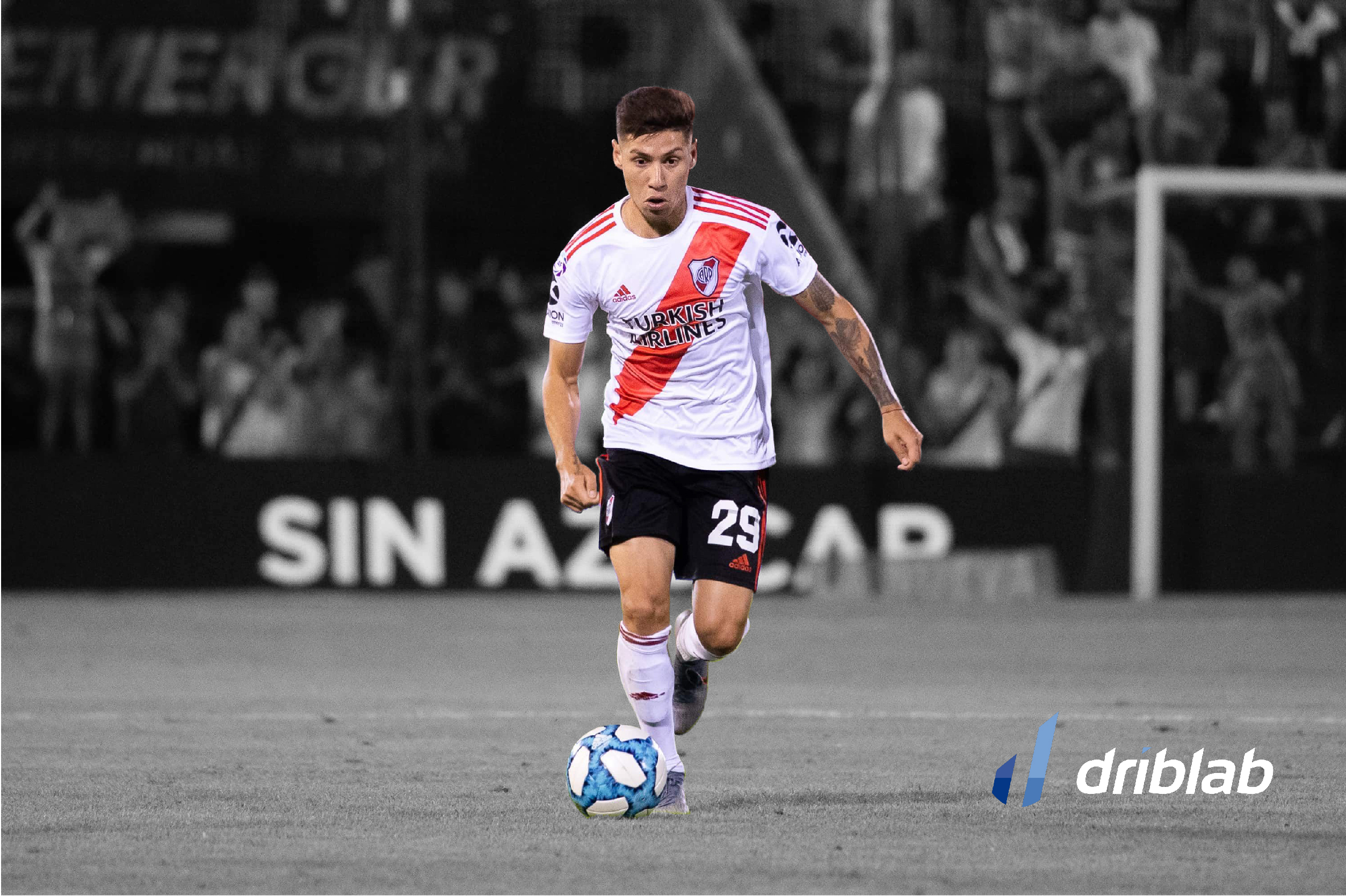 Gonzalo Montiel, the River Plate’s full-back who stands out in Argentine football, will be free in June. With the winter market in full swing, River has to go out and look for options to replace the player in case a tempting offer arrives from the old continent.

With the help of our parameterized search tool, we look for players belonging to CONMEBOL who can attract the attention of River Plate’s coaching staff.

As we can see on his radar for the last two seasons, Montiel stands out in his way of handling the ball, with a percentage of completed centers over 30% for 90 minutes, a great capacity to give key passes in play of 0.88 for 90 minutes and 3.99 recoveries for 90 minutes. In addition, the full-back exerts an individual pressure of 62.23 and creates 1.21 chances for 90 minutes, the metrics presented are higher than the average of the five major European leagues.

With this in mind, we determined the following parameters for 90 minutes:

We also narrowed down the search to players between 20 and 28 years old who have played at least 400 minutes in the last season.

The search gives us back several options, among them Daniel Múñoz, the quality of the young Colombian of Atlético Nacional already called the attention of Europe and the player became part of Genk’s team in the middle of last year, therefore he is our first option to be eliminated. The next viable options that arise are: Igor Vinicius, Giovanni González, Carlos Cabello and Carlos Espinola.

Igor Vinicius, current player from Sao Paulo, would be our second alternative as a replacement for Montiel. But, we have to take into account that in the last five seasons in the Argentinean first division only six Brazilians played and one of them is Andrés D’Alessandro, Argentinean nationalised Brazilian. Therefore, it would be correct to consider that Argentinean soccer is not easy to adapt for Brazilian players and, besides, it is a market with less visibility than Brazil’s. That’s why we also dismissed Vinicius.

One of the alternatives that promises to be easier to adapt to Argentinean football and Marcelo Gallardo’s style of play is that of the Uruguayan Giovanni González, who currently plays for Peñarol.

The player emerged from the River Plate of Uruguay youth team, which only adds romanticism to the situation, is even superior to Montiel in some metrics such as completed centers where he reaches 1.27 and 24.6% for 90 minutes, he is also more efficient in completed dribbles, achieving 0.76 for 90 minutes. In defensive tasks it also performs above average.

Despite not being a player with as much capacity to create dangerous plays, he is within the parameters we are looking for, exceeding the average of the five major European leagues. As we can see in the map of key passes of both players, Gonzalez accumulates more minutes but has achieved only half as many assists as Montiel in his country’s first division and in the Copa Libertadores.

The other two options we consider possible as reinforcements for the Buenos Aires team are the Peruvian Carlos Cabello and the Paraguayan Carlos Espinola. In the case of Espinola, the metrics are with him but the 21-year-old has played just 700 minutes in his country’s first division. Although he seems to be a promising player, he still needs minutes of play to make a more in-depth comparative analysis.

Carlos Cabello, the 21-year-old player on loan to Sport Boys of Peru, meets the requirements we set out in our parameterized search. However, in spite of his great defensive capacity, he is not as efficient in his offense. The player contributes little creation in the collective plays, a key characteristic of Montiel’s game, and his number of completed centers is much lower than the average (0.37 vs. 0.69).

Therefore, and taking into account all the above, we believe that Giovanni Gonzalez is the player who would best adapt to River Plate and could carry out the tasks that today Montiel executes successfully.