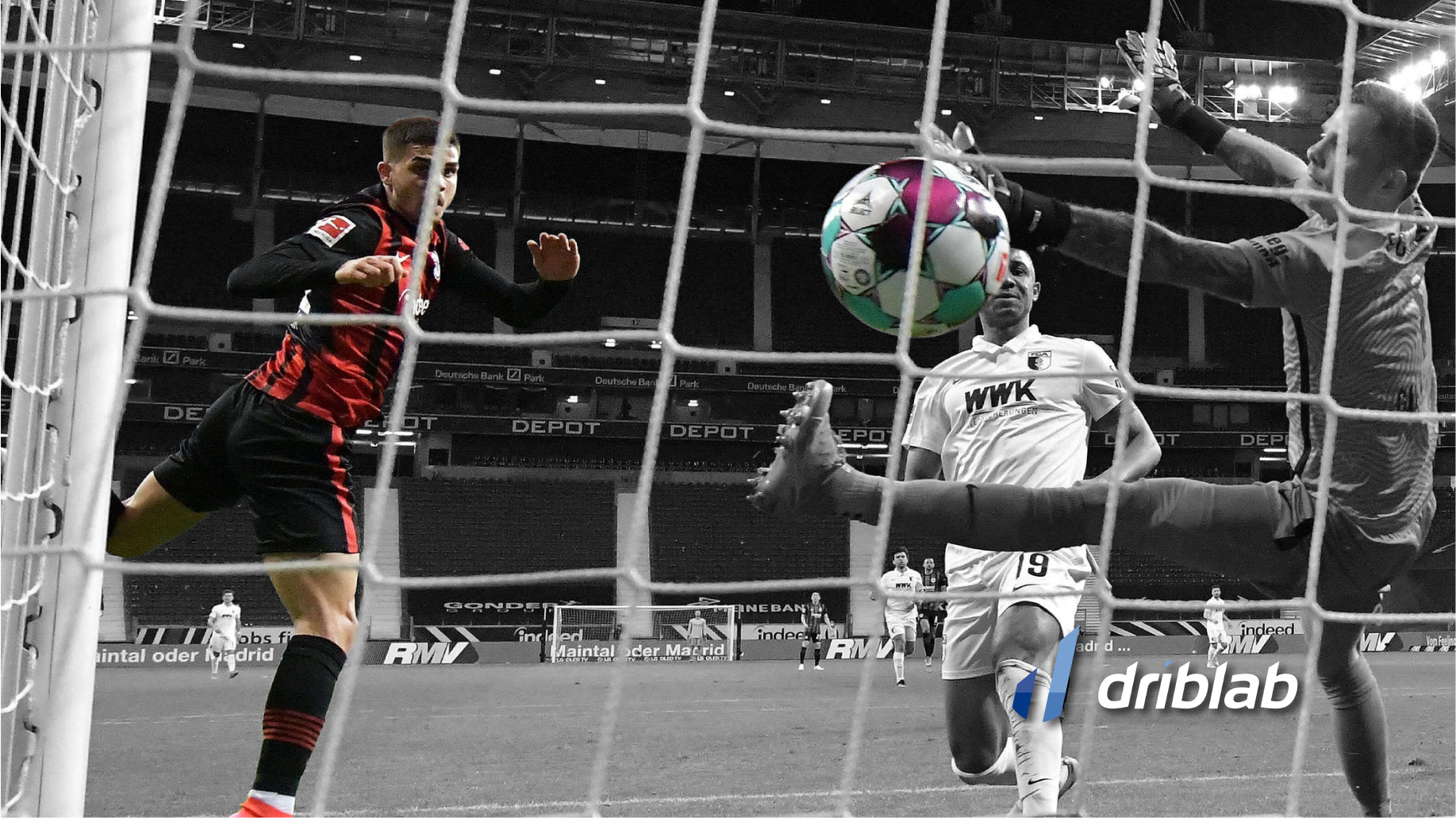 Although his prestige within the industry has been irregular, when André Silva broke through in Portugal’s first division in 2016 he quickly became the target of some of Europe’s strongest clubs. After a campaign in which he scored 29 goals in 55 official appearances -including 8 in 11 appearances for his country’s national team- Silva was transferred to Milan at the age of 21. Things didn’t quite work out for him there, but the advanced metrics we use at Driblab certify that his performance has been consistent over time: the percentages of xG generated in open play in his teams that are finished by him, his volume of touches in the rival box per 90 minutes or his passing accuracy. There were many indicators in which the player was among the top profiles of the position. But it was not until this season that he was again in the sights of the scouting departments of the richest teams. Eintracht Frankfurt “traded” him for Ante Rebić, in a double deal in which similar amounts were exchanged. To this day we can say that the manoeuvre was clearly beneficial for the German club. With continuity of minutes and no lasting injuries, Silva has scored 29 goals in just over 3,000 minutes, scoring 22 of them without penalties and with shooting situations of which only 19.44 xG were estimated. With the player likely to be sold to another club over the summer, we have made a shortlist of strikers who could replace him.

In order to find this kind of profiles, different characteristics of Silva have been assessed. His height, his associative capacity, his accuracy level in finishing or his intelligence in attacking open spaces. For the fourth of these conditions, the xG per shot -which measures the average goal probability of the attempts- or the number of touches in the opponent’s box per 90 minutes are good indicators. André’s figures in these areas have been very high in Portugal, Italy, Spain and now also in Germany. This adaptability to different contexts is what makes him such a well valued striker in the market.

For the purpose of identifying forwards that could play a similar role to Silva at Eintracht, we have carried out a parameterized search. We have defined a filter of 178 centimetres and selected players between 20 and 30 years of age, as well as setting minimum values in six metrics. In xG per shot attempted, we have been more flexible than in the other aspects in order not to leave out strikers with room for improvement in his shooting selection. Ten leagues have been included: Premier League, LaLiga, Serie A, Ligue 1, Bundesliga, Liga NOS, Turkish Süper Lig, Eredivisie, Belgian Jupiler League and Russian Premier League. In any case, the filters used have produced a quite specific list with only 21 players.

Understanding that Eintracht would earn a high quantity if they transfer Silva and considering the investment they made two years ago in Luka Jović (22.34 million euros), but also valuing the type of striker that needs to be replaced, we have shortened the initial list by selecting the profiles that best fit the search.

Extra option: Raúl de Tomás (1994 · Espanyol). If we reduce the initial requirement in the filter of touches in the opponent’s box and extend the search to competitions such as the Spanish Second Division, De Tomás emerges as a profile of considerable interest despite of his potential cost. He is a striker who has already performed well in LaLiga, has great physical condition and in the last two seasons has scored six headed goals, a facet in which Silva especially excels.

In alternatives that would require a lower investment, we have added other type of profiles. Ignatius Ganago is one of the 21 players listed in the original search. His excellent season at Lens is reflected in the advanced data and his cost was €6 million just eleven months ago. Moving away from the previous filters, we could consider profiles such as Rafa Mir, who in one of LaLiga’s least productive teams in the attacking side (Huesca – 0.92 xG per game) managed to sustain an average of 3.44 shots per 90 minutes; that figure would still be clearly above average for the position if set-piece situations are excluded (2.82). Although he tends to spend a lot of minutes away from shooting areas, Antonio Sanabria (Torino) is another forward that may be of interest for his finesse in heading shots or his ability to provide continuity to plays, although he signed for his current club a few months ago. Furthermore, many of Fedor Chalov’s (CSKA) metrics reveal a degree of similarity to Andre Silva, but he needs to improve his finishing to be a truly competitive striker in the big leagues, so we would not consider him here.