After 14 appearances as a 'blaugrana', some accuse Ferran of a low efficiency in his finishing. He's slightly below the estimated xG sum of his shooting situations, but there are a few more things to take into account 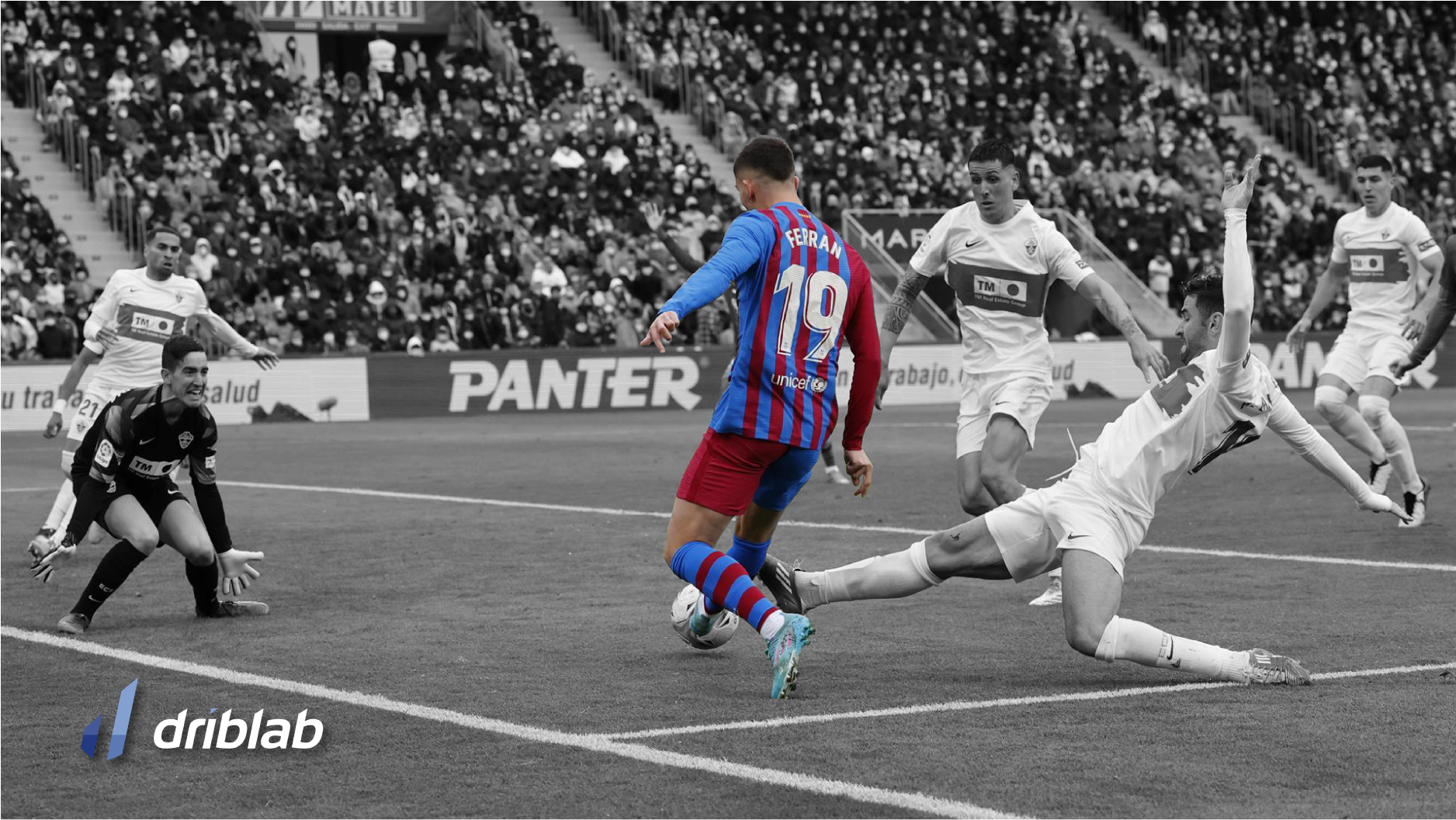 The upward tendency in Barcelona’s performance 2021/22 has different origins. In addition to the developments brought by Xavi Hernández, it is clear that the operations carried out by the club in the winter transfer window have boosted the squad. Of all of them, the one that has meant the greatest financial effort is the signing of Ferran Torres, who was transferred from Manchester City for 55 million euros. The young Valencian player has been given an important role since January, despite the fact that when he was signed he was recovering from a muscle injury: since making his debut in Riyadh during the Super Cup he has accumulated 13 starts. On the other hand, his accuracy rates in finishing have not been particularly good. In fact, he has made a few notable mistakes. Driblab models estimate that in those matches he should have scored 4.33 expected goals -without penalties- according to the shots he took. Ferran has been slightly below that estimated figure, converting only 4.

But to evaluate the performance of an attacker, you have to measure more aspects, aspects that go beyond that success in finding the goal. And in this case, also considering Ferran’s age and room for growth, we have to evaluate the ease with which he is putting himself in a shooting position. With a record of touches in the opponent’s box well above the standards for the position, the player born in 2000 averages more than 3.2 attempted shots per 90 minutes. That frequency sees him hold an average of 0.33 xG per 90′, a metric in which he clearly ranks above teammate Memphis Depay (0.26). Depay started from similar positions to Ferran in many of Barcelona’s games in the first four months of the season, although with very different movements to the Spanish. The former Lyon attacker played with more touches and made fewer runs than Ferran, who is generating many chances with his ability to sprint towards open spaces or simply get a shooting position when he is already in those final metres.

While he may not be making as much of an impact as you would expect from a striker of his value, his instinct for those long and short runs is evident in advanced metrics such as the Expected Goals per move rate within the team. If we analyse with this indicator the players of the most productive attacking teams in the five major European leagues (at least 1.60 xG generated per game), we see that Ferran is among the most influential in his team, finishing 29.6% of what Barça produce when he is on the pitch.

This relevance has been felt strongly on specific days. He is the player who has taken the most shots in a European competition match this season: he fired nine times on 17 February against Napoli. Although he has only been at Barcelona for a few months, in LaLiga he has also finished some games with an irregularly high volume of shots. On 6 March at Elche’s stadium he had a total of 6 shots, all of them inside the box and deep from the penalty spot. He finished with a total of 1.27 expected goals.

“We discovered that in this position he makes movements like the best strikers coming from behind, I would say like Jamie Vardy and this type of players. He moves incredibly well” – Pep Guardiola – 28/08/21

Months before his transfer from England, at the start of the 21/22 season, Guardiola had already shown how much progress he had made in adapting to the position of striker or false striker. For him, he was no longer the winger who had burst onto the scene at Valencia, but a player who transcended that. In a press conference at the end of August he highlighted his ability to surprise with his runs “in the style of Jamie Vardy and those types of players”, arguing that he was a very good finisher. Asked if he could play as a regular ‘9’ he was very emphatic: “Yes”.