Nagelsmann’s plan to forget about Lewandowski

We take a closer look at the change Bayern have undergone following Lewandowski's departure: how Nagelsmann has swapped wingers for strikers. 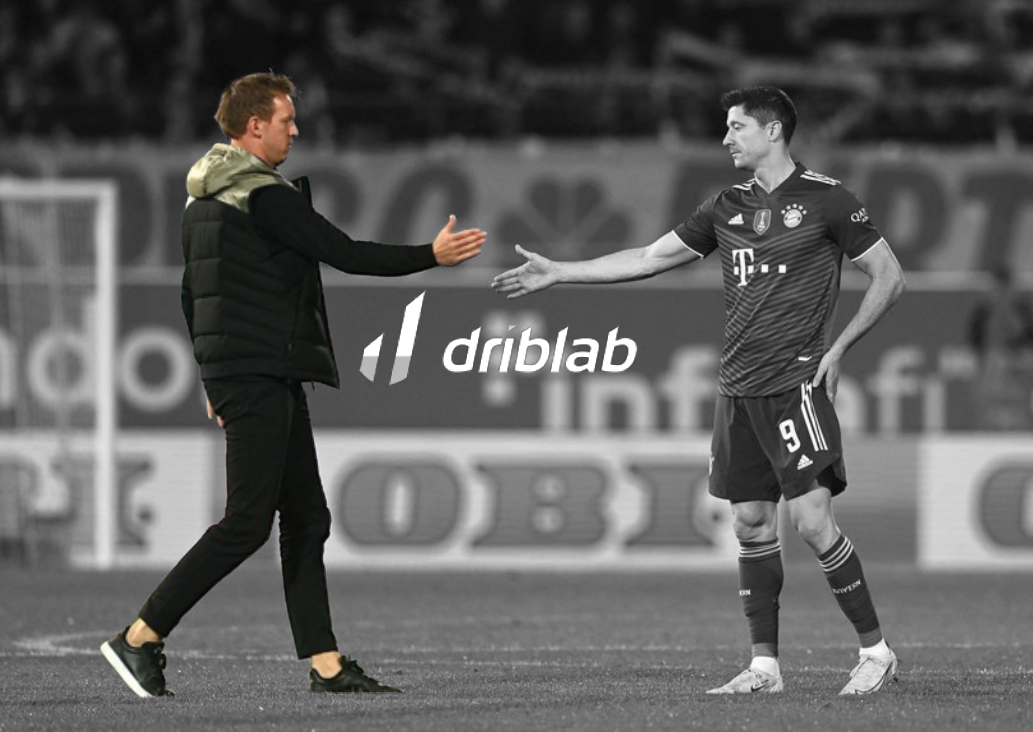 Robert Lewandowski generates 0.86 xG per 90 minutes for FC Barcelona this season, almost an expected goal per game. Nobody, not even Erling Haaland, generates more expected goals than him in Europe. Losing such a player is not good news for anyone but it is likely that Bayern and Nagelsmann are a team and a coach, by squad and ideas, capable of seeing such a departure as an opportunity.

Still, Bayern 22/23 have lost more than 40 goals a season without a forceful replacement. Mathys Tel is a gamble on the future and Mané has arrived to make sense of what Nagelsmann is looking for. The data offers a very interesting insight into how Bayern have transformed themselves, dispensing with all that is involved in playing with such a key player finishing and finishing off everything that is generated.

Before getting into questions of style, the most important thing is the team’s performance. Bayern’s ability to generate and convert in attack is very similar. However, we must not forget, at all times during the search and verification of the data that Robert Lewandowski is a unique striker, who conditions the behaviour of the team and the opposition, generating a quantity and quality of shots unmatched by any other Bayern player.

On this radar we see a difference in the quality of chances: with Lewandowski, Bayern generated 2.38 xG per 90′, to 2.05 without him; 0.36 xG from set pieces, to 0.26 xG without him, as well as a higher xG per shot of 0.12, to 0.10 without him, adding up to more offensive aerial duels won with the Pole (4.82, to 3.6). There is nothing to discover that is not already known to everyone. Lewandowski increases the quality of chances with his finishing talent, as he is managing to improve the same statistics at Barcelona.

However, Bayern maintain the volume of shots per 90′, adding more goals without penalties and the same touches in the box per game. The versatility of their attackers and Nagelsmann’s insistence on enriching combinations at full speed are having an impact on every other attacker.

To some extent, Bayern have ceased to insist on those situations that enhanced the play of the Polish centre-forward. The difference in crosses completed can be seen in these scatter graphs, from last season and this season, to show how Nagelsmann’s side has moved away from the teams that complete the most crosses, towards a much quicker, more front-foot combination team.

Above, scatter graph for the 2021/22 season, relating crosses completed to shots. In the graph below, by contrast, the one for the current season, Bayern add more shots, being higher on the vertical axis (nobody shoots more per 90 minutes than Bayern in the five big leagues) and make fewer crosses, moving their position back on the horizontal axis. In other words, he shoots more and crosses less, a simple and straightforward summary of his post-Lewandowski transformation.

This is where the change is clearly visible: Nagelsmann has converted his wide players into finishing and finishing attackers, as can be seen in the table below, from which we have excluded Sadio Mané, as he is this season’s signing, which is, moreover, a statement of intent as a replacement for Lewandowski.

In it, each of the team’s five most important attackers who are not centre forwards, Musiala, Müller, Sané, Coman and Gnabry, are doing less dribbling and less crossing per 90 minutes, in exchange for finishing and more touches in the box to make up for Lewandowksi’s absence. In other words, they no longer play for a ‘9’ and, therefore, everyone must occupy finishing areas, changing the mentality in the final third of the pitch. With the exception of the odd case such as Coman (he has only played 358 minutes), the other four have seen their numbers in dribbles and crosses decrease and increase in shots, expected goals and touches in the box.