a somewhat peculiar story, but the truth is that since settling in the Premier League in 2015 he has shown a goalscoring regularity that not many forwards at the top level can boast. However, 2019/20 was probably being the best campaign of Leicester City‘s number 9 in finishing terms. With a very low average of […] 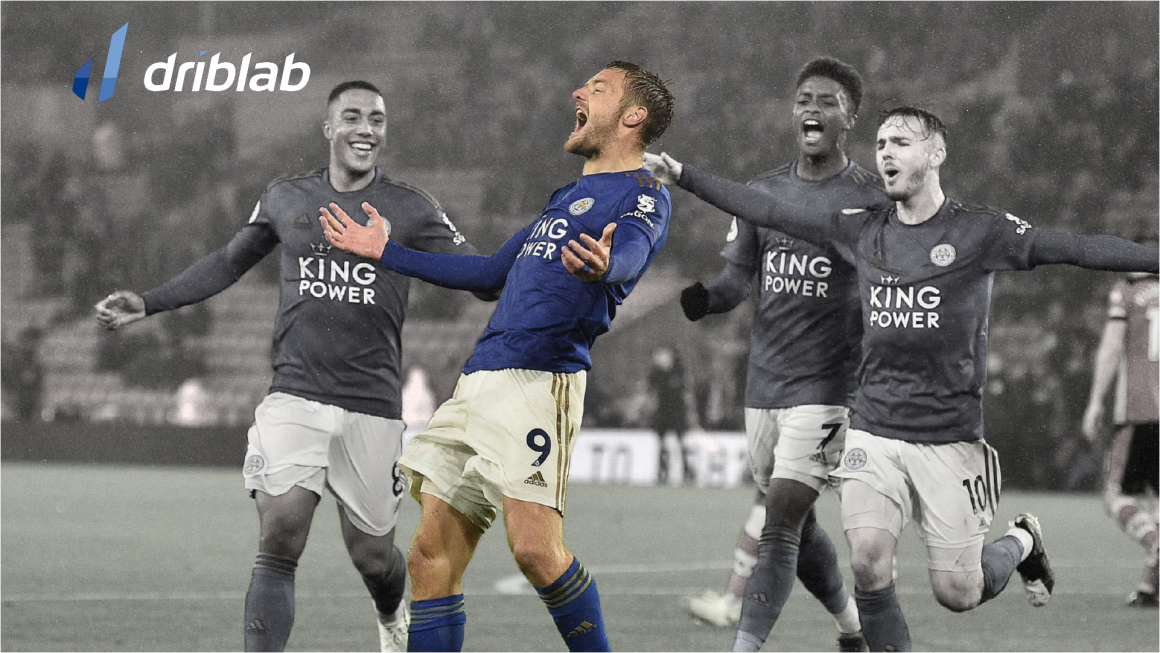 Jamie Vardy‘s a guy with a somewhat peculiar story, but the truth is that since settling in the Premier League in 2015 he has shown a goalscoring regularity that not many forwards at the top level can boast. However, 2019/20 was probably being the best campaign of Leicester City‘s number 9 in finishing terms. With a very low average of shots for a player of his position (2.03), Vardy has managed to score 0.56 goals per 90 minutes excluding penalties.

These graphs show some of his metrics compared to all the top five European leagues forwards who have played a minimum of 900 minutes this season. Although as we have already mentioned he is shooting few times, it must be said that he is selecting his shots better than most (0.19 expected goals per attempt). But what’s really distinguishing Vardy from the others is his shooting accuracy, which explains his high goal average. He has a finishing rate of 27.78 per cent and only a few such as Maxi Gomez (30%) or Mauro Icardi (33.3%) are above him in this category.

It’s really strange that Vardy’s shot volume is so low considering that the Leicester is producing a lot in attack. The Foxes have generated 1.95 expected goals per match this season. Even so, the Sheffield-born striker was leading the race to be the Premier League’s top scorer before the coronavirus outbreak stopped the competitions. At 33 and having played just 2,398 minutes, he had accumulated 19 goals, coming close to the amount (24) he scored the season the team won the league title.

In these shooting maps we have compared how Vardy finished in the 2015/16 season to how he was doing this campaign. And there is no room for doubt. If five years ago he adjusted efficiently to the shooting situations he had, this year he was showing much more cool blood and had scored at least five more goals than it was expected. 15 non-penalty-goals with chances that only accumulated 9.8 xG. With more experience in the elite and still nine matches to play, Vardy promised to hunt his best goalscoring record as a professional this year.

Analyzing the leading scorers of the last five UCL editions

With the Champions League now in its hottest phase, Kylian Mbappé's name once again sounded above the rest last Wednesday, when he prevented Bayern from reaping the rewards of their impressive attacking efforts. The player born in Paris got profitability of two...
Read More

Driblab, present at the Advanced University Master for Sporting Directors of the RFEF

Our CEO, Salvador Carmona will be teach a module in the II Advanced University Master on Sporting Director in football of the Royal Spanish Football Federation (RFEF)

During the month of March we have developed new tools at driblabPRO that expand the resources we provide to our clients. Here are the details of the month's new releases: Post-Game Analysis Following the match, managers and analysts carry out the process of...
Read More

On 25 January 2020, RB Leipzig signed one of the most sought-after players outside the big leagues. His name was Dani Olmo, he had dominated Croatian football at Dinamo Zagreb, he had been outstanding in the Spanish youth teams and he arrived at a team where he had...
Read More

Who is the best game changer?

When the initial plan doesn't work, the coaches' vision is key to see who are the players with the most ability and who are best suited to coming off the bench to revolutionize a game immediately. Just a few weeks ago, Thomas Tuchel himself admitted to having been "a...
Read More

Driblab: How the biggest football data coverage has evolved

If you want to stay one step ahead of the market you need to have the widest football coverage. That’s what Driblab is all about: more than 180,000 players at your disposal.

The latest and surprising İlkay Gündoğan

Modric continues to be key for Zidane but at 35 it seems time to look for a replacement. We use our Similarity tool to search for the new R. Madrid’s number ’10’.

Three surprises on the road to the 2024 World Cup

This week’s call-ups left us with many surprises on the road to the next World Cup.